How increase your home value by fiber connection? 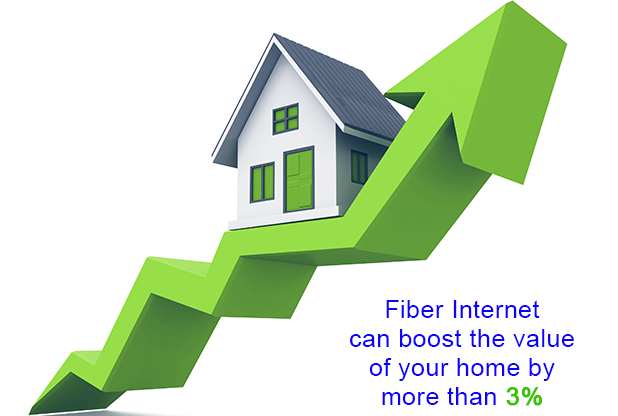 A fiber connection has an impact on home prices similar to other home improvement projects. Many homeowners opt to renovate and upgrade their homes and properties. These improvements, like redoing the kitchen, putting in hardwood floors or investing in landscaping, can be attractive features to prospective home buyers. One of the best ways you can invest in your property is by installing a fiber optic internet connection. Fiber internet connections are capable of increasing home value up to 3.1% !

Did you know fiber Internet can boost home value?

A 2015 study found that fiber optic internet could provide a more than three percent boost to home prices. On the $300,000 property value for example, this would translate into an increase of about $9,000 in price. The research showed improvements like redoing kitchens and putting in hardwood floors also have impact on house values but not as much so as installing or upgrading with fiber optics does.

Why fiber internet connection is attractive for buyers?

A study released by the Fiber Broadband Association of America (FBA) finds that communities with gigabit internet have higher per capita GDP than those without. In 2014, they found a correlation between broadband networks and improved economic performance in both rural areas as well as more populated ones like San Francisco – where residents are accustomed to high-speed Internet connections from their surrounding tech companies such as Facebook, Google and Apple.

READ THIS  how to choose a suitable cable for fiber optic?

The report showed an increased demand for fiber or “gig” connection speeds among people across the country — even though it has been proven time after time this type of network is not compatible with most devices due to its need for large amounts of data transmission at very fast rates which can be troublesome when dealing with multiple users on one line.

For homes where 1 gigabit-per-second broadband is available, transaction prices are over 7% higher than those located in areas with the highest speeds of 25 Mbps or less.

Investing in fiber optics over copper is a costly long-term investment, but prices will quickly come down as more people switch to using this technology. Fiber optic cables are much cheaper on the whole and last longer than older options like cable or DSL lines.

Investment in fiber optics may be an expensive short term decision, but it’ll pay off when you have your internet for years without worrying about downtime!

Fiber is much more durable

Copper cable is a fragile technology and even the slightest pressure can cause it to break.Copper cables are often used in companies where telecommunications space are located, but these wires could be easily damaged during routine operations due to their durability level of only being able to withstand 25 pounds worth of weight before breaking.

Fiber is more resistant to damage than other materials like copper. It can withstand pressures up to 200 pounds, which means it’s less likely that the fiber will be harmed by routine operations.

READ THIS  How Fiber Optic Internet Can Impact Your Life?

Fiber internet is the future. Learn more about how CFBTEL can support your business’s transition to fiber connection and see if fiber is available in your area today.