Home » Blog » Fiber Internet » slowdown internet: How It Happens and What to Do?

slowdown internet: How It Happens and What to Do? 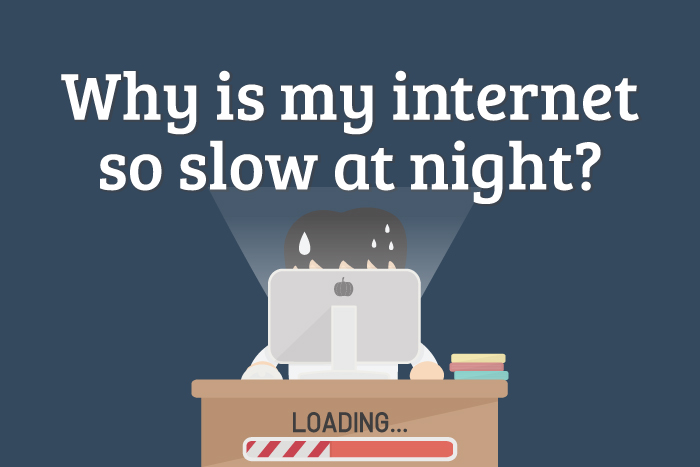 Network congestion is a common problem that many of us have experienced at one time or another. This occurs when too much data is being sent through the network, causing it to slow down and become unusable. It can happen in your home if you have a lot of people on your Wi-Fi network, but usually happens because internet providers are serving lots of customers in the same service area. Network congestion can be difficult to avoid completely, but there are steps you can take to minimize its effects on your connection.

When are peak internet hours?

Peak internet hours traditionally fall between 6 p.m. and 11 p.m., but people are now experiencing peak times at other points in the day, due to increased working from home that has given them more free time on evenings when they have finished work or school for the day—making it what many refer to as a “internet rush hour” during these times of high activity online where ISPs can only handle so much traffic per second before slowing down data speeds (just like how too many cars will slow down highway speed).

Why does network congestion happen?

Network congestion usually happens because of bandwidth bottlenecks that result from internet providers serving lots of customers in a local service area. Network congestion can also happen if you have too many people using the same Wi-Fi network at home, like when someone streams Netflix and plays an online game. This is why it’s important to invest in a high quality router with good coverage for your neighborhood so everyone has fast speeds–not just those living near phone exchanges or cable wire locations

READ THIS  How Does Fiber Optic Internet Work?

the amount of congestion you have depends on other factors.

On the other hand, fiber internet have fewer issues with network congestion because of how their networks are wired into your home.

How stop slowing down internet at night?

The internet speed of your Wi-Fi will be better during peak usage hours if you take these four steps:

If you have a dual-band router, consider using the 5 GHz band for faster speeds. The 2.4 GHz has a longer range but comes with slower speeds that can top out at 600 Mbps while the high speed connection of 1,300 Mbps is available on the 5GHz bandwidths instead if so desired and appropriate!

2. Limit the number of users connecting to it at any given time

If you have a problem with your internet connection dropping in the middle of night, ask your roommates or other family members to be mindful about excessive use during peak hours. If that’s not enough for you and want to lay down some law on those who are using up all the bandwidth without permission, there is this thing called router which lets us see who’s connected at any given time so we can kick off anyone hogging our wifi!

3. Adjusting schedule so as not tackle bandwidth heavy tasks around those times and

The best time to download files is during the daytime when there are less people on your network. You can also download a movie file in advance of your watching it and then enjoy low-buffering speeds even if you’re using an overloaded internet connection!

4.Use ethernet instead of wi-fi

Plugging your modem into a router with an Ethernet cable can give you faster internet speeds. By switching to wired connections, there will be less interference for the signal and this could drastically improve how fast your device connects to Wi-Fi or other wireless networks.

It could be that your internet simply isn’t fast enough to meet your needs, even during non-peak hours. Luckily there is a simple solution: upgrading the speed of you plan! All it takes is contacting customer service and getting them on board with giving you what you need at an affordable price for their services.

When your internet goes out at night, or during other peak usage times and you’ve tried everything to fix the problem, consider switching providers. Fiber is fast enough for gaming online and streaming movies without interruption while cable can be easily interrupted by heavy traffic in a neighborhood node meaning that DSL might actually be worth considering too!

If you’re experiencing slowdown connectivity problems with your internet provider, don’t worry because CFBTEL offers plans in a variety of speeds to fit any need. If you want more information about what’s available and where you can find it, fill out this form for personalized results from our experts or just call us!