Home » Blog » Fiber Internet » Starlink vs Fiber: Which Is The Better Internet Type? 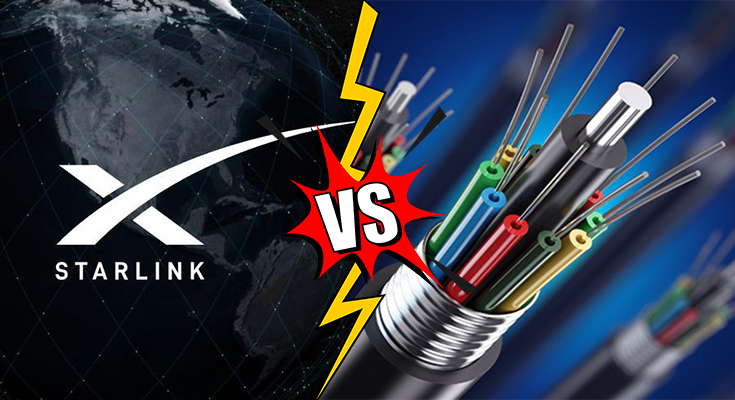 Internet is the future. It’s become such an integral part of our lives, that we often take it for granted. So much so, that people have turned to Starlink internet and fiber Internet in order to get a better experience than they would with traditional internet service providers (ISP). But which one is better? In this article, we’ll cover the differences between Starlink and fiber optic types of internet, as well as answer all of your questions about Starlink vs fiber!

What Is Starlink Internet?

Starlink is the newest form of internet that starry and SpaceX have come up with. It’s supposed to provide connection speeds around an average of 25 Mbps which is about five times faster than traditional fiber optic connections speed, but it will depend on how many satellites are in orbit at any given time.

What makes Starlink different from other types of broadband technology like cable or fiber is that Starlink is satellite internet. What this means is that Starlink requires an unobstructed view of the sky in order to function, which may limit it when compared to fiber optic connections.

what is fiber optic internet?

before Starlink, fiber internet was the only option for getting a faster internet connection. It’s been around since the 1800s and it works by using light to transmit data and images over distances of up to 100 kilometers or more, with negligible error rates

Fiber optic is more expensive, but it also has less latency. The downside of fiber optics is that you need to be close to the provider’s office in order for them to install fiber and the installation process can take up a lot of time.

When it comes to internet connectivity, optical fiber is the fastest around. But soon its title may be taken by Starlink’s new satellite system that promises average speeds of 1 GBPS. And while increased bandwidth isn’t all this company will bring to the table in their bid for leadership; I can say with certainty from experience that waiting over an hour just so you don’t lose your connection when out and about won’t happen again!

Optical fibers are considered one of today’s best high-speed technologies but competition could come quick on a competitor looking at changing everything we know about data transmission technology as they have launched their own low orbiting satellites promising 1GBPs speed which would easily take them into first place.

Fiber internet connection’s latency speed is around 17 ms which is a bit faster than cable. But, Starlink on the other hand has an expected launch date of its new low-latency service that will have speeds below 20ms and eventually reach 10ms or lower in near future – making it one of the fastest with bandwidth as well. If these predictions are accurate, then fiber would be left behind for sure when comparing to this latest development from SpaceX. For gamers out there who care about milliseconds more than anyone else, they now know where to go get their gaming fix since you can’t beat 17 vs 10!

The average cost of a fiber internet plan ranges from around $40-80/month, depending on your speeds and data allowances.

When SpaceX announced their plans for Starlink, there was a lot of discussion about the possibility that they would undercut competitors’ prices and offer cheaper internet. The company’s president Gwynne Shotwell hinted at $80/month as an idea; however, it hasn’t been confirmed if this is truly going to be its price point or not.

Starlink vs. Fiber: Availability and Reliability

With Starlink, Elon Musk hopes to connect the 3% of Americans who are most difficult to reach. Satellite internet is often chosen for its availability in rural areas and because it does not need cables or terrain that favors fiber-optics.

Fiber is still in its infancy, with networks being laid. Fiber internet costs more than any other type of connection and it’s only available in certain areas at the moment; however, Starlink will be instantly universal when launched.

Pros and Cons of Starlink Internet vs Fiber

Starlink might be the best option for your internet service needs, but until starlink isn’t available and hasn’t fulfilled on any promises we recommend you stay with fiber until it proves its reliability. If you are concerned about whether your location has fiber or not, give our executives a call! The team at CFBTEL is full of enthusiastic people who love to help find the best price for high-quality service in your zip code area.