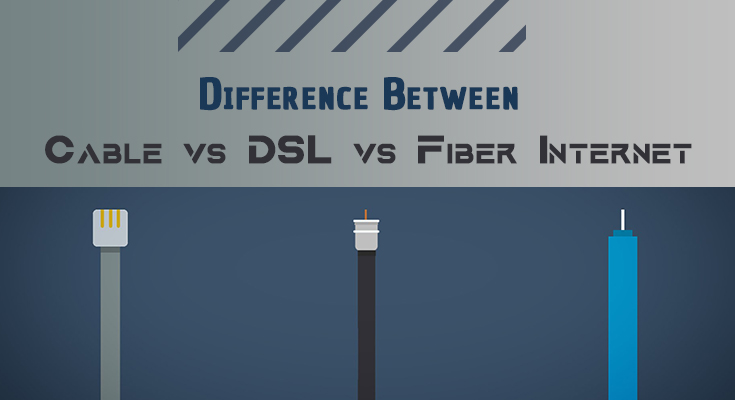 The internet is our most important resource for everything from work to education, and it’s only going to become more crucial in the future. The good news is that fiber optic cable offers a fast, reliable connection with some top-of-the-line features that DSL and cable can’t touch! Let’s explore the Top 6 Advantages of Fiber Optic Internet Connections vs DSL and Cable.

What is fiber optic internet?

Fiber optic internet is the fastest and most reliable type of data connection. It’s carried by a cable filled with thin glass or plastic fibers, which transmit signals as beams of light pulsed in pattern. Fiber optics have been shown to be 20x faster than regular “copper wire” connections (cable & DSL) because there are no metal wires for it to travel down—the information just pulses through space like an electric current flowing through water pipes! This means that fiber optic technology doesn’t experience interference from waves and can go much longer distances without any problem at all; perfect if you live too far away from your nearest server hub!

Fiber optics are the latest and most efficient form of internet. They transmit data in light beams that can travel as far as 60 miles, making them immune to interference from other cables or devices. The filament is made up of strands thinner than a human hair wrapped tightly together like yarn so they don’t unravel at high speeds; it also has an insulating sheath called cladding around it which prevents degradation of signal strength over long distances.

There are three types of fiber optic cable internet and their speed delivered by each depends heavily on how far the fibers make it toward your modem:

READ THIS  How increase your home value by fiber connection?

Fiber to the home or premises (FTTH or FTTP): means your fiber internet connection goes straight into your house. If you have a really old building, this might not be possible and even if it is, drilling holes in walls may come with some hefty costs.

Fiber to the curb (FTTC): means your fiber connection goes all the way up to a pole near you. Copper wires will then take over for some of that last-mile distance and get what’s left into your house as coaxial cables.

Fiber to the node or neighborhood (FTTN): provides a fiber connection in one mile of radius. The remaining connection from the node to your home is often DSL line that uses existing telephone and cable lines

Fiber optic internet speeds have increased by 10 to 20 times in recent years, with 1 Gbps being the speed. This is much faster than cable’s 50-100 Mbps speeds and it allows you do download a 2 hour movie within minutes (depending on file size). Fiber optics are significantly more expensive per household but they allow for higher data rates which will likely be needed as media becomes increasingly consumed via streaming services like Netflix

The truth is that your cable connection should be fast enough to stream video without interruption, but peak traffic overloads the wires. That’s where fiber optic internet vs cable speed differences get obvious and you can see how much better it performs even when there are many more people on at once!

Cutting your internet speed in half because you’re using too much doesn’t sound like a good deal to me. Imagine that it’s the middle of winter and all you want is just enough data for Netflix, but instead we give what feels like dial-up speeds?

The same thing happens with our cable internet systems; Internet providers use throttling to prevent those outages during peak times. At this time, your ISP may lower your cable speed from 100 Mbps down to 20 or less so they can ration service when there are tons of people trying to get on at once . Fiber optic networks don’t throttle since they become overloaded less often than other type bandwidths do and offer some really great benefits!

Fiber optic internet service is a lot faster than cable, and it’s not just for downloading. With fiber optic speeds, you can upload files with the speed of your download – no lags or delays! That means uploading videos to YouTube becomes easier because video encoding happens in record time then all there is left do share them on social media sites like Facebook and Twitter for others to see too.

Fiber optics also makes working from home much more efficient; instead of slow downloads making work take twice as long when done at home, now that we have access to 100% reliable connection through Fiber Optic Internet

Cable internet may struggle at times to deliver 4K streaming when it is only 100 Mbps or less, which means the average person will be more than satisfied with fiber optic. Fiber can run even faster and still have no trouble delivering high-quality television shows in a variety of formats such as 1080p HDTV (high definition), 2160i UHDTV (ultra high definition) or 3D TV programs like those from Netflix, Hulu+, Vudu+Xfinity On Demand and Youtube Red Originals.

With speeds of up to 500 mega bits per second on an Ethernet connection for example, you should not experience any problems watching your favorite show in either 1080P HD format suitable for widescreen TVs 16:9 aspect ratio

READ THIS  What is Fiber Internet? - The Ultimate Guide

It’s not that gaming uses mega bandwidth. In fact, compared to high-quality video streaming or downloading a movie in seconds, it sips on less than 1 Mbps of data. What challenges gamers is the consistency: if you have even one tiny hiccup while playing Fortnite or League of Legends and at just the wrong moment—you’re dead! Unfortunately for most cable internet providers (and DSL), there are plenty little hiccups all day long with these types of connections which makes your game much more challenging as any twitch can get you killed thanks to fiber optic providers like AT&T Fiber who deliver a smooth and constant flow meaning whenever you twitch; everything responds accordingly without interruption so when an enemy comes around

What are the disadvantages of fiber optic internet service?

The availability of fiber optic internet providers is limited to metropolitan areas. This means that only 25% of US residents have access, which creates a major problem with the speed and accessibility between consumers and businesses.

With the advent of 5G, we are being given a chance to have internet speeds up to 10 times faster than fiber optics – without wires! The major carriers (like Verizon) all seem like they’re racing against each other in order for one of them to be able to claim “The #1 wireless provider.” Thus far, most companies that planned on installing fiber optic cable across America has either pulled back or abandoned their plans.

In the past, fiber optic prices have been higher than cable and DSL. However, as infrastructure installation costs come down some more in recent years, this price difference has seen a significant decrease to approximately $10-20 per month for most households that can afford it but with faster speeds than ever before!

slowdown internet: How It Happens and What to Do?

Network congestion is a common problem that many of us have experienced at one time or...
Read Article
Fiber Internet

The COVID-19 crisis has changed the way many people in America and across the globe live...
Read Article
Fiber Internet

How increase your home value by fiber connection?

A fiber connection has an impact on home prices similar to other home improvement projects. Many...
Read Article
Fiber Internet

In the age of ever-evolving technological advances, it may seem difficult to imagine that we could...
Read Article
Fiber Internet

Starlink vs Fiber: Which Is The Better Internet Type? Internet is the future. It’s become such...
Read Article
Fiber Internet

What is Fiber Internet? – The Ultimate Guide

What is Fiber Internet? Fiber-optic internet is a broadband connection that can reach speeds of up...
Read Article
Leave a Replay

What is cloud-based network management?
August 31, 2021
With our solutions helping
you to save money
Want to see how We can
help you?
Let's Talk
(800) 211-6155
Chat Now
By clicking “Submit” you agree to our privacy policy.