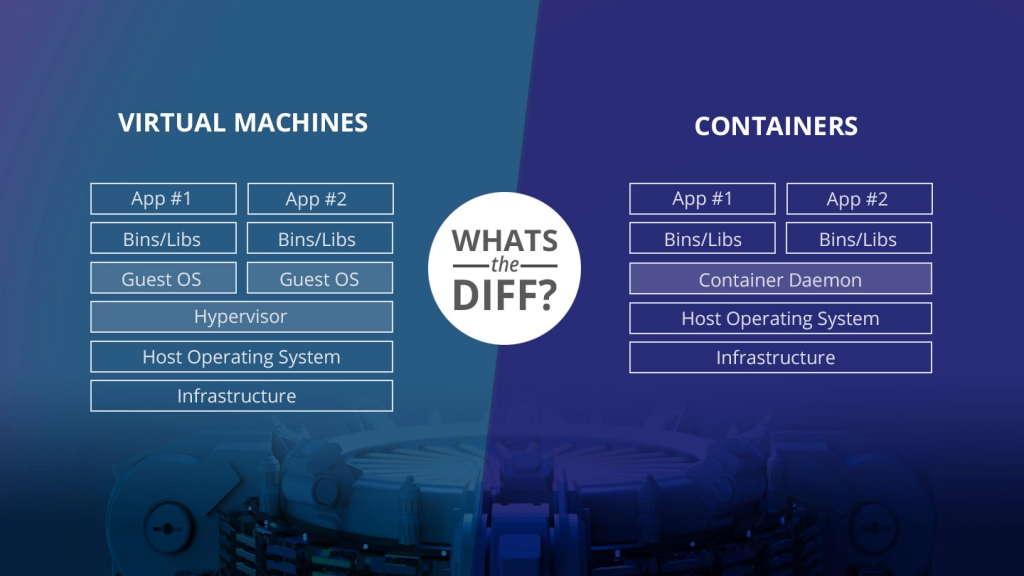 Virtual machines and containers are two forms of Virtualization that are often used by cloud native software developers. Virtual Machines (VMs) can be thought of as a traditional form of Virtualization, while Containers have become more popular in recent years. Virtual Machines work well for many situations, but they may not always be the right solution for your needs. In this blog post we will discuss what each type is and when to use them!

Virtualization is the process of using software to create layers over hardware that divide a computer into multiple virtual computers. This allows for an easy switch from one operating system and application suite, without having to reboot your entire machine every time you want it.

The software used to create virtual machines is called a hypervisor, which comes in two forms: on physical servers that you buy from the store and those running inside other operating systems. The most popular type of hypervisors are those installed onto bare metal servers with powerful CPUs found at data centers. This technique allows them divide themselves into several independent “virtual machines” so they can run more than one computing system simultaneously without conflict over resources (i.e., RAM).

What are virtual machines?

Virtual machines are a technology for building virtualized computing environments. They have been around for quite some time and they’re considered the foundation of first generation cloud computing technologies. Simply put, VMs enable teams to run what appear to be multiple computers with different operating systems on one computer by using lightweight software layers called hypervisors that can separate them from each other or allocate processors, memory, and storage as needed among all their needs in order to work seamlessly together even when not actually physically present at the same location or device.

Containers offer a lighter-weight, more agile way to handle virtualization. They don’t use hypervisors so you can enjoy faster resource provisioning and speedier availability of new applications. Containers include everything needed for the application or microservice (along with runtime libraries) within their own environment which enables them to run just about anywhere – on your desktop computer, traditional IT infrastructure or even in unmodified operating systems themselves!

VMs vs.  Containers: What are the differences?

Virtualization is a great way to save space and reduce the time needed for IT personnel. This method of virtualizing hardware allows each VM, or guest OS (operating system), contains its own copy that it needs in order to run along with any other applications on the platform. You can have different operating systems running side by side – such as Windows next Linux, etc) without having them all take up physical resources from one server at once!

Containers pack a lot of power into an small, lightweight package. These virtualized environments allow for each individual container to only contain the application and its libraries and dependencies without including guest OS from every instance which is useful because it saves time when booting up or shutting down containers with hardware-specific needs

Containers are convenient: they don’t require as much space on your hard drive or RAM so you can run more applications at once than if using traditional methods like Virtual Machines. Containing everything in one easy to transfer file makes them fast too!

READ THIS  A Guide to Using Managed IT Services

Containers not only improve CPU and memory utilization, but also enable granular microservice architectures. This enables developers to fix problems related to load on a component-by-component basis with ease rather than scaling up the entire application as one unit when it may be more efficient just to scale for that specific module experiencing an issue instead of all modules at once.

VM’s have many benefits, but containers offer a level of flexibility and portability that is perfect for the multicloud world. When developers create new applications, they might not know all of the places it will need to be deployed today; tomorrow an organization may run their application on its private cloud or even one provided by another provider so long as it can handle containerized software environment requirements. Containerizing applications provides teams with much needed flexibilities which are crucial in handling modern IT environments where there are various software needs from different providers like AWS and Azure

What Are the Benefits of Using a Managed Service Provider

Let’s start by talking about what managed IT services are. Managed services enable a business to...
Read Article
IT services

The Managed Services Your Company Requires to Succeed

To be successful in business, you must put in the effort necessary. For most companies, this...
Read Article
IT services

A Guide to Using Managed IT Services

Many firms outsource their IT to a managed service provider, who will manage and take responsibility...
Read Article
IT services

Managed IT Services: Your Total IT Management Solution

Your business will not succeed until your IT infrastructure is successful. In reality, for many...
Read Article
IT services

Which IT Managed Services Will Be Your Fit?

The dedicated hosts The hosting providers have sophisticated services, as well as a wide range of...
Read Article
IT services

What is Virtualization and How Does it Work?

Virtualization is the process of virtualizing a physical machine to create virtual machines. This article will...
Read Article
Leave a Replay