What is Fiber Internet? – The Ultimate Guide 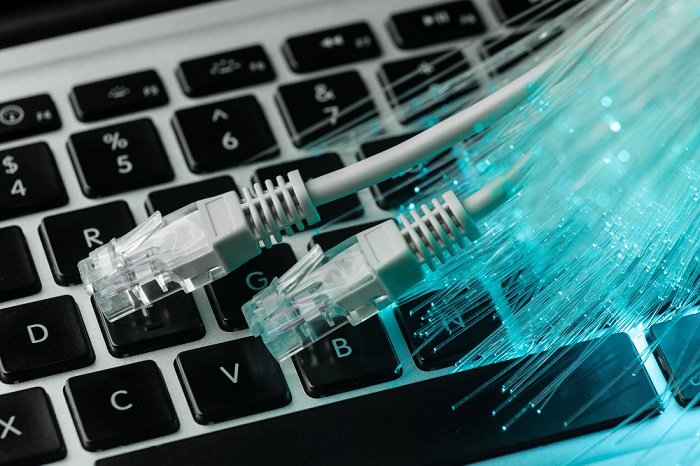 What is Fiber Internet?

Fiber-optic internet is a broadband connection that can reach speeds of up to 940 Megabits per second (Mbps). This technology uses fiber optics, which amazingly allows for data as fast as about 70% the speed of light. Fiber cables are also not susceptible to severe weather conditions like other types so traditional cable and it resists electrical interference effectively.

Fiber is the best connection because it provides faster upload and download speeds, smoother online gaming and video chatting with friends and family. With CFBTEL Fiber service you can:

How does fiber-optic internet work?

Fiber-optic internet is a complex technology that allows the transmission of information in light form rather than electricity. There are many pieces that make up this advanced technology, but two key components include optical fiber and so called “last mile” of the fiber-optic network.

Optical fibers are even tinier than a human hair. A bundle of these tiny threads can communicate long distances without the need for electricity and copper, which is commonly used in coaxial cables. Optical fiber lines carry light pulses that work similarly to 0’s and 1’s in electronics; they transmit information by converting it from electrical signals into streams of binary code before traveling down an optical line at speeds up to 600 million miles per second!

The pulses of light sent from the main fiber network line are converted into electrical signals that can be understood by your devices. This is done by optical network terminals, which send these signals through an ethernet connection to you as soon as they get it. The space between the main fiber network line and the end user is referred to as the “last mile” (though it is often much shorter than a mile).
“Pure fiber” refers to fiber connections that run all the way to the end user’s home, business or desktop computer. This is the fastest and most expensive “last mile” option, as it brings the full speed and reliability of fiber straight to the consumer.
As an alternative, copper cables are often used to carry the fiber connection from a terminal called a “street cabinet” to a whole housing block, campus or residential building. The downside is that this option does come at a cost and there will inevitably be some loss of speed by carrying it over such long distances, but what’s important is reliability in transmission- which copper wire offers much better than any other material!

Fiber-optic technology has been used in telecommunications since the 1970s, but it was not until 1988 that fiber optic cables were laid beneath the ocean to connect America and Europe. Today there is a huge network of fiber optics stretching around our entire globe with its high-speed capabilities and reliable transmission of data which allowed for dramatic progress in telecom fields – some say this made information age possible.

READ THIS  what are the pros and cons of fiber optic internet?

Fiber-optic lines replaced older copper ones years ago, forming the core of our current internet networks. This new technology is steadily expanding across cities and directly to homes as their price continues to drop.

How is fiber different from other types of internet?

The main difference is that fiber internet doesn’t use electric current like other types of connections. It uses light, delivered through the glass core to your home.

nternet technologies have evolved dramatically over time. Here is a brief synopsis of the main types of connections that are still used, and how they work:

Dial-up, which was once the most common way of connecting to the internet 20 years ago, has since been replaced by faster broadband speeds and wireless connections. Dial-ups use existing telephone lines that are usually made up primarily of copper wiring; this is also why you will hear a series of beeps as it connects with an audible frequency. It cannot be used simultaneously with your phone because they share one line – so if someone calls during a dial-up time period you won’t get connected until after their call ends! With more than half its speed being spent on tones for connection rather than actual data transfer rates (about 56 Kbps), downloading or uploading files – meaning you’ll need patience if you want a quick download!

DSL internet is a form of high-speed data transmission, which uses your telephone lines to transmit digital information. DSL differs from dial up in that it does not use audible frequencies and will not interfere with voice phone service. With speeds averaging between 1 to 100 Mbps for downloading and up to 20 Mpbs for uploading, DSL provides an affordable alternative to cable or satellite providers.

Cable internet has the same type of line as cable TV, known as “coaxial cable”. You can get speeds anywhere from 940 Mbps  for downloading and up to 50Mbps where on average.

Is fiber optic the fastest internet?

The fiber optic cables transmit data at a much faster rate than any other type of connection. It can be as fast as 100Gbps, and with fiber it is not slowed down by the distance to its destination like any other internet services would be.

Due to this speed difference, you might have seen your bandwidth drastically decrease when using WiFi over fiber because of its tendency towards reduced signal strength as compared with wired connections that enter into routers.

What are the advantages of fiber for internet users?

Fiber internet can be a great choice for high-bandwidth households, especially if there are multiple users who want to stream videos, play online games or send/receive large files at the same time.

A fiber connection is ideal for long distance connections as it provides an exceptional experience across all devices and Internet connected systems – from home security to smart thermostats and ovens.

Let’s take a look at how long it takes to download different types of media.

One of the biggest costs in building a fiber-optic network is also one you might not have thought about: digging up ground to bury cable. But telecommunications companies don’t just lay down more cables when they’re done; instead, some add “dark fibers,” or unused tubes that will be used for future development (while “lit” refers to those already connected).